Life in space. It’s not the exciting adventure that the stories would have you believe. Sure, you’re floating in the black but day to day you’ve got jobs to do, friends to see and chores to complete. It’s all rather… normal. Life aboard the vast orbital Habitats of Tau Ceti is just that - everyday life

Until something goes wrong.

Then it takes a turn for the dramatic.

What is Hopes and Dreams of the Orbital Bound?

A slice of life RPG that explores life aboard a gigantic alien space station and how, for those that have known nothing else, even life in space can become normal, or even boring.

The game draws narrative inspiration for the works of Becky Chambers and her Wayfarer novels while the mechanics were inspired by Gregor Hutton's cyberpunk game Remember Tomorrow. Players pass control of characters, factions and situations from one to another using a rotating GM role to narrate scenes of individual growth, build relationships and challenge the situations facing their community.

Over time, as characters enter and leave they will build a vibrant collective of characters and locations that can be used to populate future games set within the Dyson Eclipse.

What is the Dyson Eclipse?

The Dyson Eclipse is a growing space opera setting that follows humanity as they voyage to Tau Ceti and explore mysterious mega-structures called Arrays in orbit around the star. Each new game and adventure will explore and develop a different aspect of the setting, slowly revealing the secrets behind the Arrays and the role they will play in the future of humanity. The first game in the series, Signal to Noise, was funded during Zine Month 2021 and has since been joined by Rock Hoppers and The Kandhara Contraband.

Hopes and Dreams of the Orbital Bound is by Craig Duffy, LunarShadow Designs. The campaign launches on the 7th February with a goal of £500, which will pay for an initial print run and hiring of a small team to complete the project. The game will be printed as an A5 landscape zine featuring the art of Blair Smith (cover) and Val Sannais (interior character art) with editing by Emzy Wisker.

Banner images in a range of aspect ratios, cover and interior mockups. 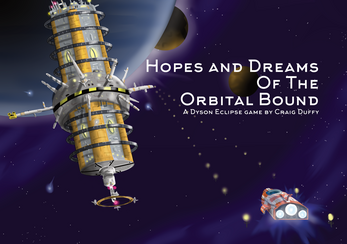 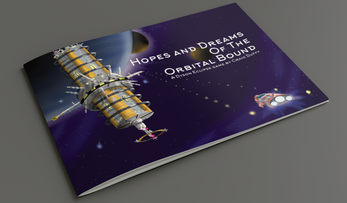 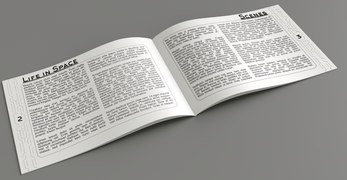