Welcome to The Synth Convergence, a trilogy of missions for The Sprawl RPG built around a core theme - synthetic intelligence. Across the three mission teams will cross paths with prominent synths and be forced to confront the question of how far they will go for their Corporate paycheck in a society where inequality is rife and Corporations control every rung of the ladder.

In The Tannhauser Investment (available as a free demo) the team are brought in to negotiate the tricky process of a hostile Corporate takeover - all while evading the awareness of the synth consciousness built into the super-luxury hotel the target is holed up in.

The Infinitive Extraction takes the team to the beating heart of the entertainment districts as they seek to extract Infinitive Cascade, the hottest DJ on the circuits from an exploitative contract. But do your employers want them for their musical talents or the military codebase at the core of their personality matrix?

Finally in The Vanda-Weiss Demolition the past catches up with the team as they face off against The Evolved, an extremist fringe group dedicated to wiping out synths and returning humanity to the true path before they are toppled by their own creations.

Get in, do the job, get out. It's never that simple but if it was they wouldn't have hired professionals like you.

The Synth Convergence requires a copy of The Sprawl RPG to play. Purchase it from Ardens Ludere on driveThruRPG. Support the creators - buy the game

In order to download this game you must purchase it at or above the minimum price of $6 USD. You will get access to the following files:

Support this game at or above a special price point to receive something exclusive.

Each copy of The Synth Convergence that is purchased supports the wider community by making free copies available for those whose budget doesn't allow them to buy the missions. If you're unable to budget for a copy of this trilogy priced as listed, please claim one of these free copies for the community.

Will there be more Community Copies available in the future?

Yes, there will be some more being added once the current bundle sale ends this weekend.

Okay, thanks for replying!

New community copies have been added.

I got one now! Thanks so much!

The Synth Convergence is a set of three scenarios that focus on 'synthetic life'. My Sprawl games are usually more in the style of Neuromancer, where fully sentient AI is very rare. This set of scenarios give the game a much more 'sci-fi' feel -- more like Ghost in the Shell.
Like with other mission files for The Sprawl, there are multiple CORPs involved. In the prologue, there is a very handy checklist of which CORPs are involved in which scenario. You could easily use that to connect them to CORPs in your game world.

First up is The Tannhauser Investment. In this mission, the team is hired to infiltrate a very exclusive resort hotel to intimidate an exec to sell their shares. The hotel is managed by an AI, which interacts with the guests through a set of semi-independent synthetic 'units'. There's another guest with lots of armed security nearby, and they are nervous -- so they could mistake any gunfire as directed towards them, which is a delicious complication to throw in the mix!
I would have liked to know more about the various types of units available to the AI, and how it would activate which ones under which circumstances. Maybe that could have been tied to the clock? Speaking of clocks: the Legwork Clock gives very little leeway: the Action Clock gets advanced quite quickly.

The second mission in this pack is the Infinitive Extraction. This is an inspired piece of work, multi-layered with several actors that a smart team could play against each other. The team is hired to extract an android, a (former) military-grade AI that turned into a DJ. This AI chose to exclusively inhabit a physical body, which is essentially owned by a CORP -- so they are under contract with their record label. The AI wants out and has made arrangements to be kidnapped before the first concert of their world tour to promote their new album.
But there is the 'Evolved', a group that protests synthetic life. They are not fond of the synth DJ, and have announced to protest their concert. This is why security is beefed up -- but they expect protesters, not a team of professionals. If the team doesn't play their cards right, things could escalate quite badly.
I love the multiple layers in this mission, and how the Evolved could turn into a long-term threat. It is also an invitation to think about the social and ethical implications of synthetic life, which I like a lot. After all, cyberpunk is a very political genre. There's ample information for the MC on armaments and tactics, based on the situations the CORP expects. Reading this mission got me excited for all the good trouble the team could get into!

The third mission is The Vanda-Weiss Demolition. It is exactly as what it says on the packaging: the team are tasked (or even blackmailed!) to bring down the aging Vanda-Weiss arcology. It's actually a result of the first scenario! There's a simple catch: this is not some kind of CORP-owned asset, but a derelict slum where low-wage workers live -- which is also a hotbed for Evolved recruitment. Is the team prepared to basically kill hundreds of innocents, or will they go against their corporate overlords, with all associated consequences?
I love the description of the locations in the arcology. It really makes the place come alive and gives it purpose beyond just being a decor or collateral damage. And this is the kind of stuff that makes cyberpunk so cool: there's a real choice to make, and each choice has consequences. This mission is the highlight of the collection for me.

Then there are four pages of locations and NPCs to populate your Sprawl with. These do not have any direct connection with the three missions, and could easily be inserted in any game. The NPCs are inspired and spark ideas on how to use them.
Do I have criticism? Yes, I do. For one, the PDF does not have bookmarks, which is a shame -- having them makes getting around the book a lot easier. And the Legwork Clocks advance the Action Clocks very fast, severely limiting the investigations the team can do before going in.
But would I recommend this? Yes. Yes, I would. This trio of missions describe a really cool story arc, with a lot of impact. This is cyberpunk at its best.

The Sprawl is chaotic and elegant, and I think it will appeal to folks who aren't entirely sold on PbtA.

Synth Convergence is a great addition to it.

Synth is 37 pages, with solid layout, some photo illustrations, and a very immersive and visually consistent feeling throughout the PDF. The white text is a little tough to stare at, as it radiates against the black background, but it's got a lot of room and never feels squeezed, and using color instead of bold is a really good touch.

The first mission, The Tannhauser Investment, is a fairly straightforward And Then It Goes Wrong run---probably best suited for games that already emphasize the bleakness and disposability of mercenary work.

The second mission, The Infinitive Extraction, is much more gentle in its pacing, starting out as an extraction and then slowly rolling out complication after complication. It feels like a good fit for people who wants to experience the setting when bullets *aren't* flying.

The third mission, The Vanda-Weiss Demolition, digs into in-setting politics, putting the PCs in a place where they can shape high-level maneuvering for structurally significant factions. It *does* push towards the PCs becoming anti-corporate, and it may be wise to run it without the initial blackmail, thus giving the group an out.

In addition to these missions, there are also some cool locations and NPCs that can be popped into existing campaigns.

Overall, Synth Convergence is a worthwhile supplement to grab if you've got a copy of The Sprawl---or if you've got another hard-sci cyberpunk rpg that you'd like some plot hooks for. Synth has solid writing, good structure, and adds a neat subplot that ties in very well to the themes and style of The Sprawl. 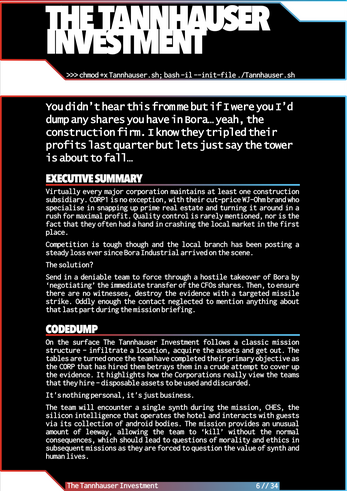 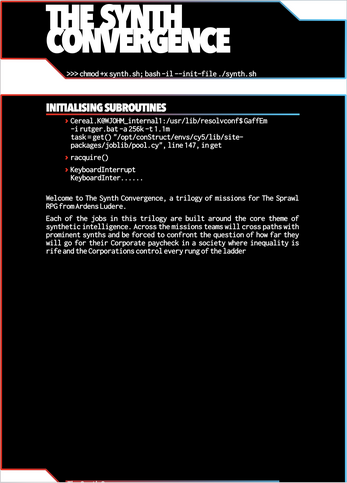